What day is it? Friday! What does that mean? It's time for Remix Friday! Join me as I celebrate another creative pattern adaptation. This one is particularly cute. Is your phone naked? Does it need a cute costume? Kate is here with us to share her awesome idea for clothing naked phones.

The Crocheter
My real name is Kate Wood, and my Ravelry username is tinypantswood (it's a college nickname). When I'm not crocheting, I'm creative director for a web startup, working mainly with small businesses to improve their websites and web presence. I do a bit of a bunch of things -- graphic design, writing, etc. Mostly though, I'm crocheting, and working on many DIY projects -- my husband and I just bought a house, and we're in full-on nesting mode.

The Story
So when my parents first got iPhones (and dropped their landline, making this the only way to get in touch with them), my dad was constantly losing his phone, just leaving it random places. Eventually it got lost lost, and since I had just upgraded to a new iPhone, I sent him my old one. To help him keep track of it though, I decided to make a case for it as well. I wanted to make something sort of funny/cheeky, and also that would make the phone harder to lose (so kind of big, easy to find). I decided to make a phone sleeve to look like my mom's Cockapoo (Cocker Spaniel/Poodle mix).

As soon as my dad got it, my mom wanted me to make her one. I wish I'd written down the changes I made either time I made it -- I've had people ask me for the "pattern," but I just winged it the first time, and the second time did the best I could with the photos I'd taken of the first one.

The Remix
So basically, I was looking to make an iPhone cover that would be hard to lose. Working with eyelash yarn is a pain in the you-know-what, but I thought using a novelty yarn would help cushion the phone and make it more findable (my mom always says one of the main reasons she likes hers is because she can always find it by feel in whatever giant bag she's toting around). It also recreated Ruggles' (the dog's) fur pretty well.

I looked at a whole lot of different patterns for basic smartphone sleeves before I found one that worked for me (which is the pattern the Ravelry project links to) -- I also got a lot of guidance from another one too though, so it should get at least partial credit. I worked the pattern using the eyelash yarn held together with just a basic, easy-care acrylic (Vanna's Choice). Since both the yarns together were a bit bulky, I used an I hook -- even with that big a hook, the stitches still came out fairly tight.

To make it look like a dog, and hold the phone in place, I added a flap that continued off the back of the phone sleeve. Basically, after finishing the sleeve pattern (which was worked in the round), I switched to working in rows. I worked even for a few rows, then worked decreases at the ends of each row to taper it for the nose/muzzle. I also left a buttonhole where the "nose" would go -- I sewed a round black button to the sleeve which holds the head/flap closed, making it look like a dog face when the sleeve is buttoned closed. I also sewed little "eye" buttons to the flap -- this worked better than safety eyes, since the back side of the flap needed to be flat.


I don't remember if I made the ears as separate pieces and then sewed them on, or if I picked up stitches on the sides of the flap and went from there. They were just worked back and forth in rows, increasing a little at first, and then decreasing on the last rows to make a dog ear shape. 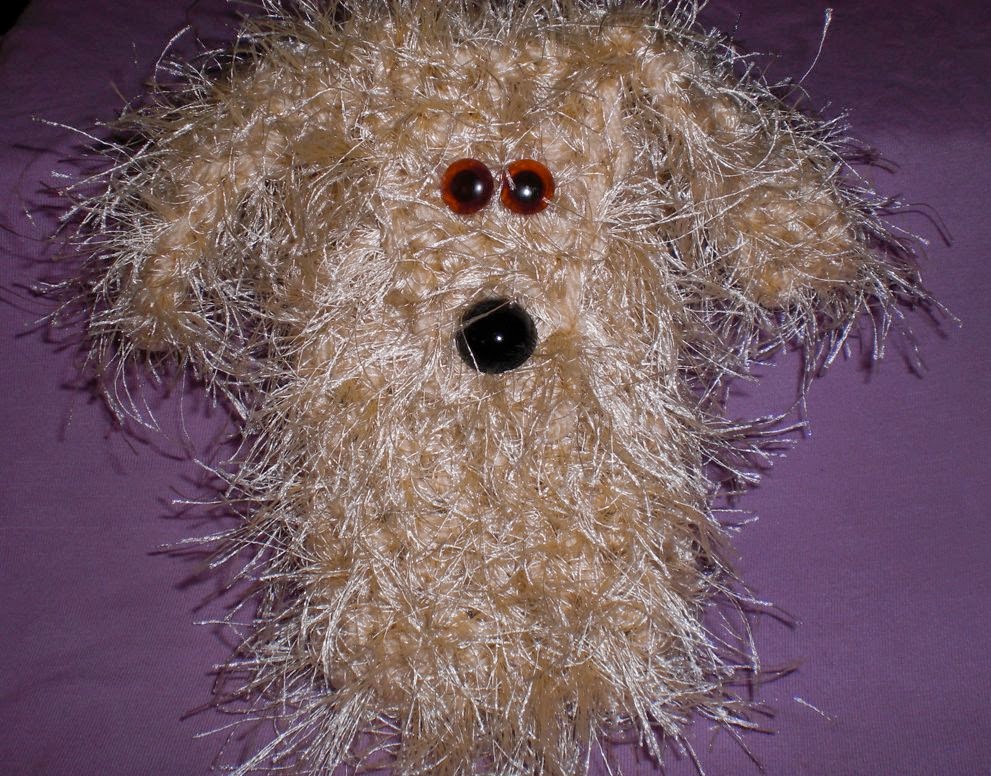 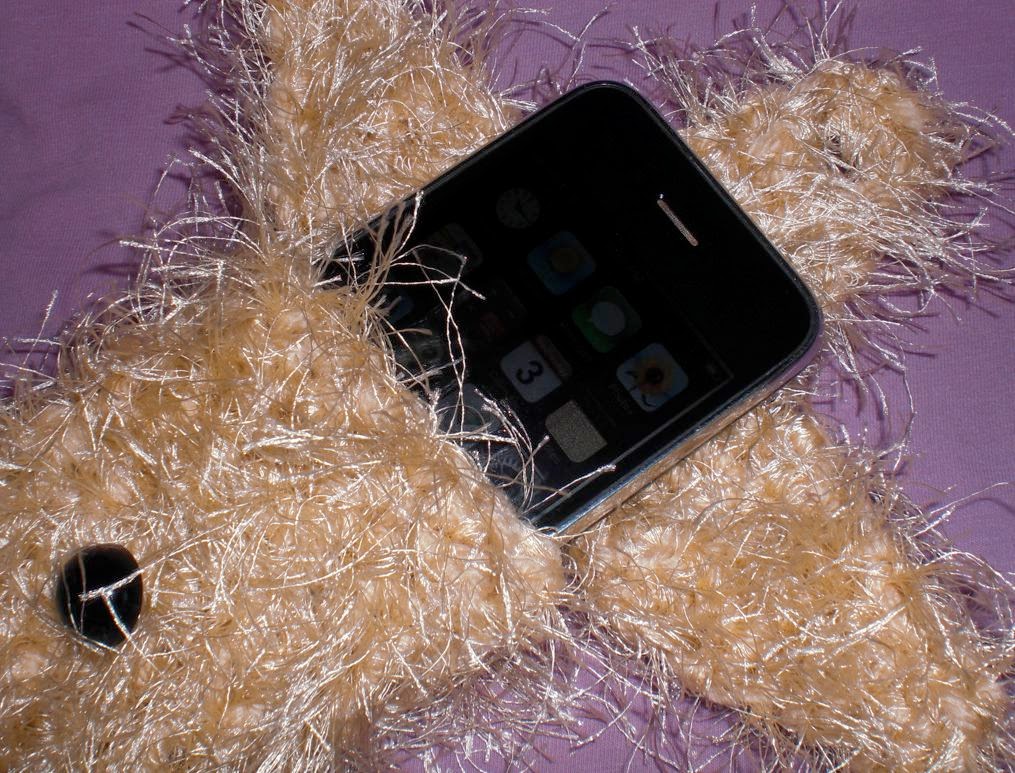 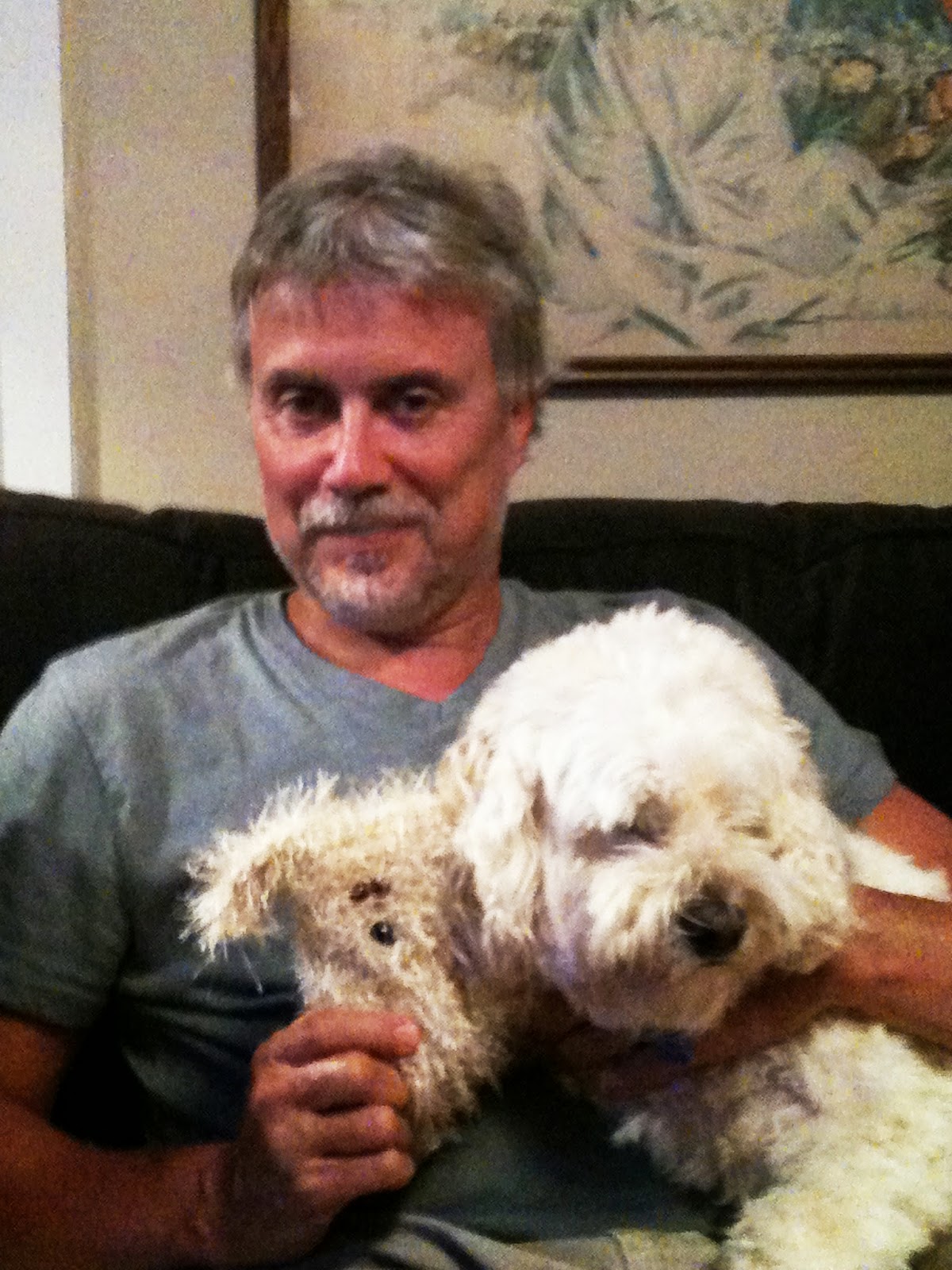 Crochet is... satisfying creative outlet (though the other 3 words I thought of were "stressful stress reliever"!)

I've gone from improvisation to pattern creation. I have some free patterns as well as some for sale on Ravelry, and I also have patterns and finished objects for sale on Etsy (which admittedly needs a major overhaul, but again, new house). My business name is Small and Great Crochet (since I mostly crochet creatures great and small).

Isn't that last pic so sweet? I realized after I contacted Kate about her adorable Cockapoo Cozy that I totally have one of her patterns in my Ravelry queue! How fun :) In addition to the links above you can also find her on Twitter. Thank you so much for sharing your creative cozy with us today, Kate!
Posted by Illuminate Crochet at 7:35 AM