Merry Christmas! I hope you're having a great day today, no matter what you celebrate. Did you make any crochet presents this year? I've been so busy with secret crochet that I was worried I wouldn't be able to make any. However, I managed to squeeze two gifts in! The first is a small crochet taco that I made for my recipient in a Secret Santa exchange. She really likes tacos, so I included the little guy along with her gift. He has a string so that he can be used as an ornament. 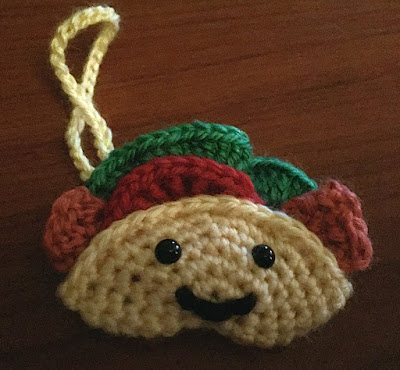 I free-handed the tiny taco in Cascade Cherub Aran scraps. No pattern this time. However, if you wanted to you could probably recreate him. I started with a yellow, single crochet circle that had too many increases towards the center and too few on the outer rim (so that it would give him a taco-y shape), ending with a rim of single crochet in front loops only. I then folded the circle in half and placed the eyes and mouth. For the lettuce, I double crocheted a half circle and ended with an outer row that had three dc in each dc. This created the ripple. The meat was a simple half double crochet strip. The tomato was a round of double crochet followed by a round where I worked [1 hdc into dc, 1 fpdc around post of same dc]. I layered the fillings inside the taco and sewed him up under the single crochet ridge. Finally, I slip stitched into the back of the taco and chained to add the hanging strand. All in all he took me about 40 minutes to complete.

The other gift I made was a slice of pie for my pie-loving boyfriend. I used this crochet pie pattern by Sherry Rohekar. It was easy to follow and fun to make. If you decide to follow the pattern, I highly encourage you to add the optional single crochet finishing border. The difference between adding the border and not was very noticeable. I used Berroco Comfort Chunky to make this pie slice. The face was my own addition, as well as the whipped cream. 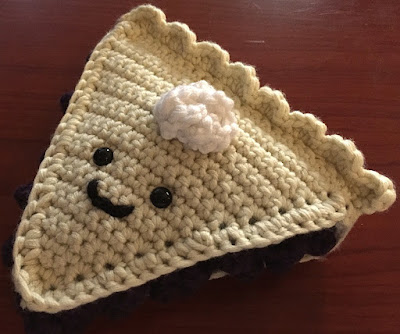 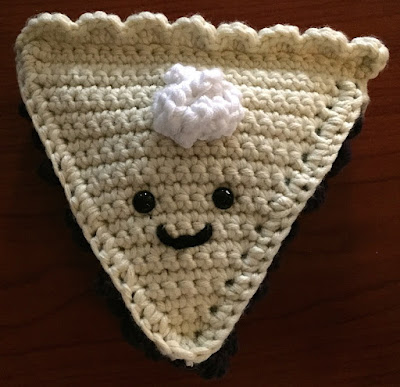 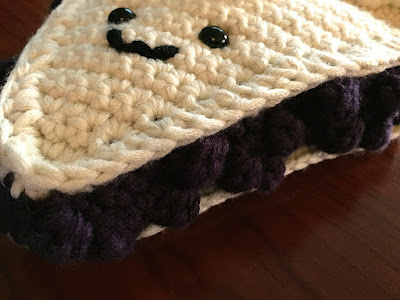 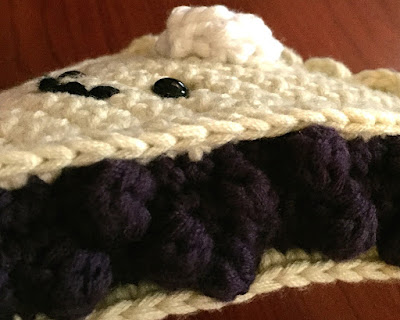 Posted by Illuminate Crochet at 4:19 PM