Alexis, my former co-worker turned friend, has the most adorable child. (She's also an excellent hat model.) He is currently three years old and melt-your-heart cute. I always enjoy the stories Alexis shares about him, especially the funny things that he says.

One day, Alexis was working one-on-one with an elementary student who attends the school that I manage. She planned a mosaic art project for the day, a snowman made of ripped pieces of construction paper. Upon returning home, she shared her example project with her son. The following is my best second-hand account of their conversation:

Alexis: "Look what I made at work today. What is it?"

Adorable child: "It IS a shrimp!" *points to nose of snowman*

But alas, the little one was insistent that the snowman's nose was a shrimp. He didn't stop there, either. Over the next several weeks, he declared several other things to be shrimp, including a slice of lemon in a glass of water. I decided that I needed to make the little dude a crochet shrimp, so that when he emphatically declared "it IS a shrimp" he would be right. When Alexis mentioned that I was making a shrimp for him, he commented "Oh! It will be tasty."

I'm not sure how tasty it is, but here is the shrimp. I made it with leftover yarn from my Sushi Baby Set, which worked out quite well. I recorded pattern notes for the shrimp, but don't have an official pattern for it yet. I may develop one later if there is interest. 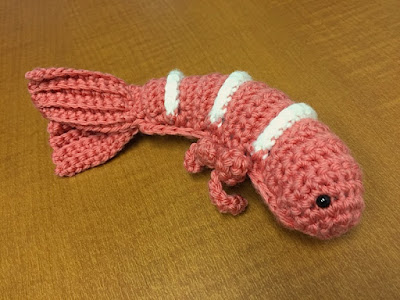 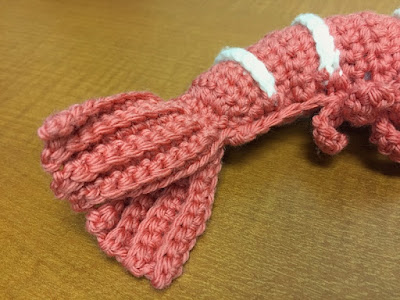 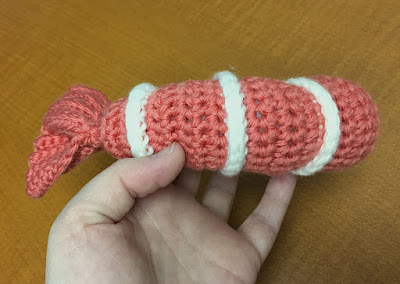 Alexis has mentioned that her son is quite pleased with his acquisition.
Posted by Illuminate Crochet at 1:35 PM