Initial Thoughts on the Differences Between Knitting and Crochet

I've finally reached the point in knitting where I feel like I understand the process and the stitches (for the most part). It's common for folks to compare the two and make various statements about their differences. Ideas about which is "better" for one thing or another can spark controversy. For my part, I'd like to share my thoughts about the differences, strengths, and weaknesses of each craft thus far. I do have a bit of a bias toward crochet, but I'll endeavor to keep my bias out of it. The following is all opinion based but may be of use to you as you decide which craft to use for what purpose. 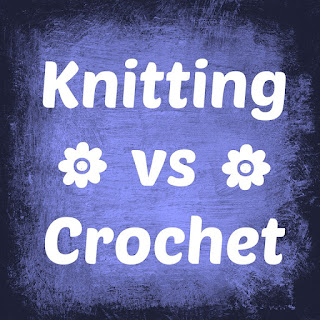 It's easier to create various shapes in crochet, especially for toys and dolls.
Shaping in crochet is easier to do. Only one stitch is active at a time, giving you lots of freedom. In knitting you have to think ahead a lot more when it comes to creating specific shapes and plan how to achieve them.

Knitted fabric truly is more flexible.
There's a lot you can do by changing your hook size and yarn, but the structure of knitted stitches simply makes a more flexible fabric than crochet stitches do. This is why knitted fabric is heavily preferred for garments. Crochet can make some beautiful clothes, for sure, but the fabric characteristics are different.

It's way easier to fix a mistake in crochet.
Even if your mistake was rows and rows back, you can just rip out your stitches and correct it. In knitting you have to reactivate all of the stitches in the row with the mistake, an annoying and precise process. Also, a dropped stitch in crochet is usually not a big deal and can even be fudged or ignored. In knitting, the dropped stitch will just keep dropping down the work and create a problem. I've made some large crochet errors before, but even the smallest knitting error irritates me way more.

Knitting uses less yarn.
Knitting does use about a third less yarn than crochet on average. It's not a big deal, but it might be important when you only have one skein. However...

Crochet grows much faster and gives you a sense of completion sooner.
I'm not a particularly quick crocheter, but spending several hours crocheting can make me feel like I've really gotten something done. I had barely picked up my hook before I had my upcoming crochet bag pattern complete. In contrast, I feel like I could knit all day and still barely have a few inches. The difference in the height of the stitches just makes knitting grow more slowly.

Details and finishing touches are more easily achieved in crochet.
I also think that they are prettier. I recently made a knitted cowl with a picot edge. I had to knit an extra eight rounds on both the top and bottom in order to achieve it. A picot edge in crochet is easy peasy. Also, you have to think about your edges way earlier in knitting or make them as separate pieces and sew them on. In crochet, you don't have to worry about your borders at all until the very end. Pretty lace add-ons and appliques are also simple to put together in crochet. Those things take longer and are harder to make when knitting.

As you can see, there are pros and cons to each craft. However, I don't think one is better than the other. They are different and are both useful and wonderful. As long as you keep your end goal in mind, you'll be able to decide which craft is right for you or your project. I encourage all of you crocheters out there to try knitting and all of you knitters to pick up a hook!

PS: Here's my crochet bias finally coming out... Did you know that in knitting you are sometimes instructed to use a crochet hook to fix mistakes, to add beads, or to seam? I don't recall ever having been asked to use knitting needles in my crochet :p
Posted by Sara at 10:50 PM

Email ThisBlogThis!Share to TwitterShare to FacebookShare to Pinterest
Labels: knitting