Have you ever read a crochet forum and been totally baffled by the seemingly foreign language that the people there are speaking? LYS, FO, WIP...is your head spinning? Fear not, newbs (that means newbies). I am here to lay out the lingo for you. Note that lingo is different from terminology and is used as slang rather than for instructions.

LYS = Local Yarn Store. The place you go for nicer yarns. The folks there may or may not snark at   you for being a crocheter and not a knitter, the clearly superior craft *eye roll*.

FO = Finished Object. That thing you just spent so much time working on and finally finished? That's your FO.

UFO = Unfinished Object. This is the opposite of an FO and usually hangs around for longer than you'd like to admit. Man, I just see UFO's everywhere...in the dresser drawer, in my project box, shoved into bags...I think they're coming to get me!

WIP = Work In Progress. A more optimistic term for an object you're not done with yet. You likely still work on this on a regular basis, unlike UFOs that lie dormant and in wait.

Brocheter = Male Crocheter. Because bros got the hook-up too!

Frogging = Ripping out your crochet stitches because you made a mistake or want to salvage the yarn. Project too hard? Too annoying? Too old? Too messed up? Frog those stitches! It makes a "ribbit" noise when you "rip-it" out.

Stitch'n'Bitch = A social gathering of crocheters and/or knitters. Call all your hookers and brocheters and have yourselves a yarny party!

CAL = Crochet-a-long. 'Cause omg, like, everyone else is doing it!

Cat = Ultimate destroyer of prized crochet items. I can't put this yarn down for one second without my cat trying to steal it!

I may or may not have made that last one up. 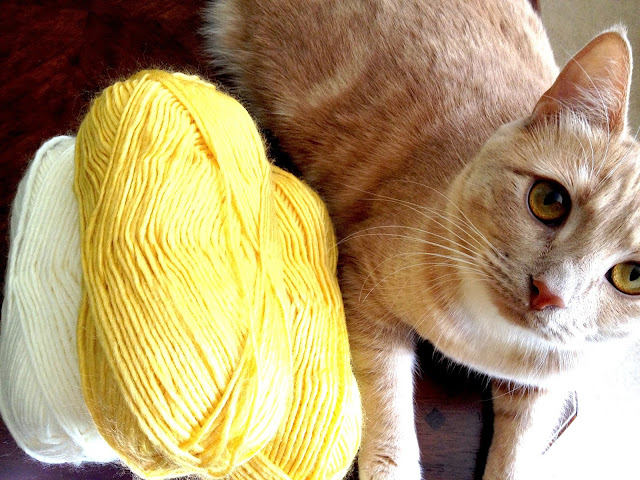