Hello, friends! Today is the day for the first ever Remix Friday! As I mentioned in this post, Remix Friday is a time to celebrate beyond-the-pattern projects by everyday crocheters. I am so excited to show you what talented crafters from all over the world have been up to. We're kicking things off in a big way with Karin's Amineko 2013 Temperature Cat. This project is super impressive and creative.

The Crocheter
I'm Karin, 33 years old and from the Netherlands. I'm a freelance programmer. I've been doing crafts all my life, when I was little it was one craft after another and back. My main hobby from 2005 onwards was scrap booking, which I still do too. There wasn't much in the way of fiber arts, I did do my share of making friendship bracelets when I was 14-15 but that was it on the fiber front until three years ago when I saw a book in a craft store ad about making amigurumi dogs. I went to town the next day to pick up the book and materials and got started. From there it kept going, I quickly found Ravelry and of course the Amineko pattern. I bought the book on Amazon and finished my first Amineko in February, about a month after I started crocheting. I made several more and a few months later made and gifted a couple modeled after my friend's cats. She liked them so much she also started crocheting and then ended up challenging me by making them smaller and smaller, using the original pattern but thinner yarn, up to the point where we made one with size 80 tatting cotton using a 0.6mm crochet hook. I also crocheted several shawls, cowls, a bag, and a big blanket that proudly lays on my bed every day. I also started knitting in 2012, and my Aminekos soon got company from a couple of Jacobus monkeys. Recently I've added weaving to the lineup of fiber arts.

I mainly use acrylics and sport cotton, for budgetary reasons mostly. I crochet because I like doing it so I don't mind using cheaper materials, I find it a challenge to make something beautiful out of something cheap. Color wise I often lean torwards pink but mostly I like to find color combinations that really work.

The Story
I was chatting along in the Crochet Small Talkers group on Ravelry where I learned about the year in temperatures scarf idea. This 'pattern' by Kristen Cooper is a concept where you take a pattern with rows to make up a total of 365 rows where each row represents the temperature for a day in that year. I loved the idea, and then I thought I could take it a step further by altering the Amineko pattern. I wanted to do this for 2013 for a few reasons. First of all I'd had a few rough years before and I had the feeling this was going to be 'my year', when things would get better. A year worth remembering. Secondly, even though I'm not superstitious I often found myself avoiding the number 13. If I was on a project and I was about to call it a day but I found myself on row 13 I would continue and finish row 14 before stopping. I figured this would be the ultimate way of stopping that, doing a project all about 2013. As it turned out it was an interesting year temperature wise too, which was a nice bonus.

The Remix
For the Temperature Amineko I carefully looked at the differences between the original and bigger Amineko patterns from the book. Basically you'll see that for the big pattern the number of rows and stitches is multiplied by two. So for the head, for example, you'd normally start with 6 and increase by 6 for 8 rows giving you 48, now you increase for another 8 rows giving you 96 stitches at the widest point. I wanted to recalculate this pattern in such a way that you'd have 365 rows from the coloured part of the legs up to the tips of the ears. This meant multiplying the big pattern by about 2.4. This made the widest part of the head 228 stitches long! I picked 26 colours for the different temperatures from my sport cotton stash. I did a lot of the calculations and charts for which color to use for which rows in Excel (actually, libreoffice calc, which is like Excel). 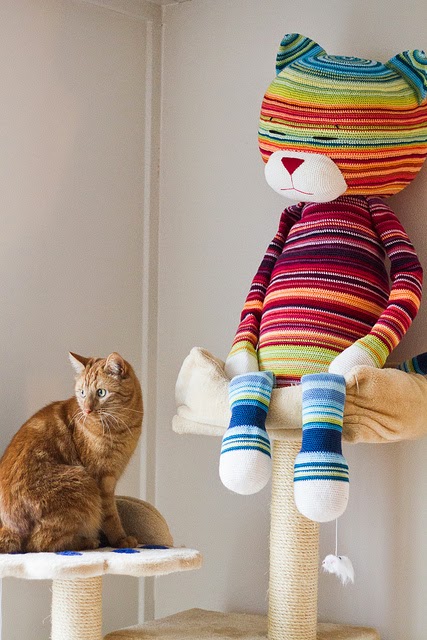 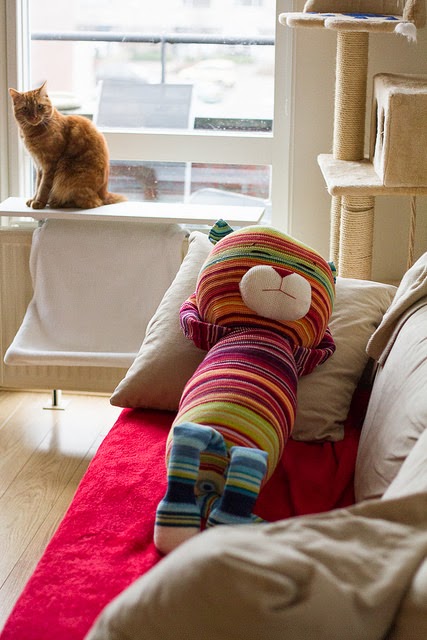 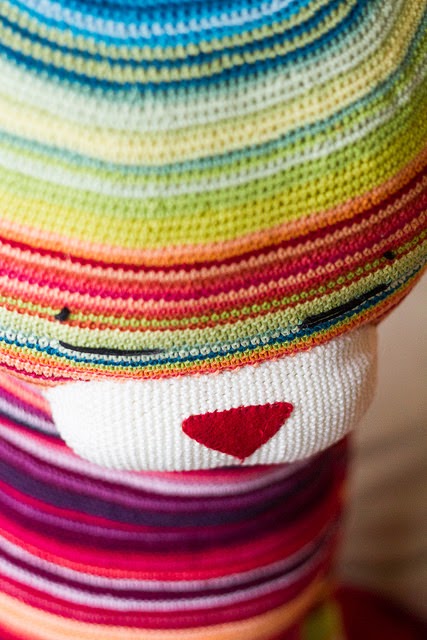 Wow, what a cat! All of the vibrant colors make it so special. I've heard of temperature projects before, but this is the first time I've seen it done as a stuffed animal. Neat! If you'd like to see more of Karin's ongoing craft adventures you can visit her blog. Thanks for sharing your cat with us, Karin!
Posted by Sara at 9:04 AM